Anyone who’s traveled before knows how quickly plans can change in an airport. That’s why it’s important to be up-to-speed on the IATA (International Air Transport Association) and ICAO (International Civil Aviation Organization) codes associated with major airlines around the world. Keep reading to learn more about airline abbreviations and airline call signs that you may encounter in your travels. 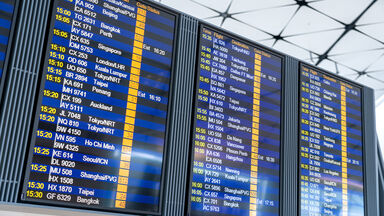 Canada, Mexico, and the United States make up several of the biggest airlines in the world. In particular, Delta and American Airlines carry the most passengers and have the largest fleets in the world. Here are codes for some of North America’s major airlines.

Airlines in Central and South America transport customers both domestically and internationally. Take a look at these codes of major airlines in Latin America.

Air France, British Airways, and Lufthansa are three of the largest airlines in the world. But Ryanair, an Irish airline, has carried more passengers than its larger competitors in the last few years. Here is a list of IATA and ICAO codes for major European airlines.

The United Arab Emirates holds some of the biggest airlines in the region, including Air Arabia, Etihad Airways, and Emirates Sky Cargo. Keep reading to learn the codes for other Middle Eastern airlines flying today.

Ethiopian Airlines is the largest airline in Africa, followed closely by South African Airways. However, there are many ways to see the beautiful countries in Africa. Here are some codes you may need when booking a flight to or from Africa.

Here are some common airline call signs. Some are predictable, like AEROFLOT for Aeroflot Russian Airlines. Others, like SHAMROCK for Aer Lingus Airlines or JEDI for Jet Story, are a little more interesting.

If you’re planning a trip to another country, we’ve got some helpful guides and articles for you to use. Check out a list of ways to say “hello” and “how are you?” in different languages. Or, if you’re looking for travel inspiration, read through these travel quotes that will make you want to pack your bags!