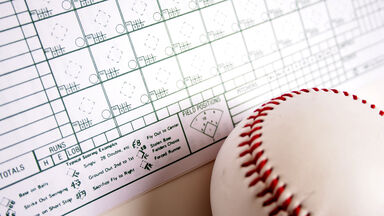 If you’re using a baseball scorecard book, the space you have to write in is extremely small. That’s where abbreviations come in. You can add a lot more information in a small space when you use baseball shorthand.

Each baseball position is abbreviated using a standard number. That way, you don’t have to write the player’s name or their position to record a fielding play. When you see numbers separated by dashes, like 6-3 for example, it shows you which players touched the ball and in what order.

When players are at bat, you can use shorthand to show you what kind of hit they got, if they got one.

Scoreboards at baseball fields typically use many of the same abbreviations you would use for a baseball scorecard. Each field has its own style, so you may see a variety of different baseball scoreboards throughout the world.

One of the simplest formats for a baseball scoreboard is the line score.

Keep Score at the Ball Game

Some baseball scorecards and scoreboards also include basic baseball stat abbreviations for individual players, so it’s important to learn those too. Once you’ve baseball scoring jargon down, take yourself out to the ball game and give scorekeeping a try! If you love learning about baseball, explore some fun baseball facts.