Acronyms, abbreviations and initialisms, oh my! From text messages to in-person convos, we all use shorthand every day. But is your shortened way of expressing an idea an acronym? It depends on how you say it. Acronyms are formed by using the first letter of each word in a phrase to form a new word. For example, “you only live once” is shortened to the acronym YOLO, which you’d say as “yoh-loh.” 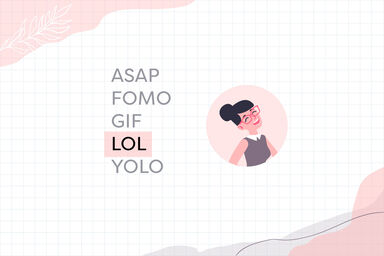 You may not even realize that your favorite TV show, movie character or musician is using an acronym as their name!

Whether you’re DMing, texting or chatting in your favorite video game, acronyms are the key to keeping these messages quick and concise. These are the acronyms you probably use or read on the daily.

There is a bit of debate about whether initialisms are acronyms or if acronyms and initialisms are both just types of abbreviations. An initialism is an abbreviation that uses the first letter of each word in the phrase it’s describing (like an acronym), but you still say each letter of the initialism individually (unlike an acronym). For example, the Federal Bureau of Investigations is shortened to FBI, but you say it as “eff-bee-eye,” not “fbi.”

If you’re on the team that considers initialisms as a type of acronym, these are some common initialism examples:

Common Acronyms in the Military and Government

Listening to conversations in a government or official settings can be a bit like hearing a new language for the first time. Get in-the-know with common acronyms used in government and military settings.

Common Initialisms in the Military and Government

You won’t often hear these initialisms spoken as new words, even if some appear to spell out a new word.

Acronyms are a useful way to convey essential information quickly, but only if you know what they mean. Informative acronyms are commonly used in the medical field but have also crossed over from industries into daily life.

Acronyms are often used in the business world to identify a business or to create shorthand communication between co-workers.

Business people often speak in initialisms once they’re comfortable with the industry lingo.

Some acronyms identify an organization or person by shortening a long name into a pronounced acronym. Explore these common identifiers for organizations and dating.

Although it’s not unheard of for people to pronounce AARP as “arp” these days, these initialisms aren’t true acronyms — yet.

Abbreviations, acronyms and initialisms are all fair game for becoming new words thanks to the anything-goes attitude of today’s wordsmiths. Who knows — you might even invent an acronym that becomes commonplace years from now.