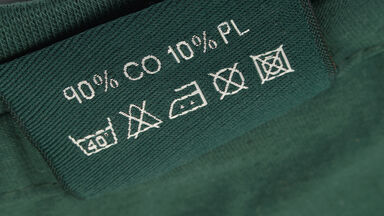 Natural fibers are any type of fabric or textile that comes from nature. This can include plant fibers like cotton and animal fibers like wool. If you see one of these abbreviations, you’ll know what it means:

Man-made fibers can be those completely created in the lab or they can be textiles created using artificial methods. Sometimes, they are made from natural materials, but calling them natural fibers is false advertising. They have been heavily processed to take the qualities desired in a particular textile. Whether they start in nature or in the lab, it’s helpful to know their abbreviations:

Fabric Abbreviations for Blends and Qualities

Some textiles are a blend of multiple fibers. The following abbreviations refer to fabric blends:

Textile Abbreviations for Use and Durability

If you’re in the decorating trade or need to understand the labels on decorative fabrics, you’ll find this is another way manufacturers use abbreviations. These use abbreviations can offer important information about the durability of various textiles in the form of “rubs.”

A “rub” is a back-and-forth movement of a mechanical arm pushing a piece of cotton duck fabric against the tested fabric until the fibers of the tested fabric start to break. You may see the following abbreviations referring to durability or “rubs”:

The fiber content and usage guidelines for various textiles are important to understand, no matter how you plan to use the materials. From fashion to home decor, you’ll find these common abbreviations on labels and fabric descriptions.