Should you convert your money into another currency for your next trip? There are 180 world currencies recognized by the United Nations, which are used in 195 different countries. Keep reading to learn the abbreviations for every world currency as well as what countries use each currency. 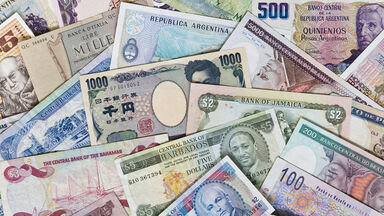 The continent of Asia is one of the fastest growing economic territories in the world. Each country in Asia uses its own currency with the exception of Timor-Leste, which uses the US dollar. Here is a list of Asian countries and the currencies they use.

Countries in the Oceania region include independent island states, territories, and large countries like Australia. Many of these countries use either the US dollar or the Australian dollar. Read on to learn what currencies each country in Oceania uses.

The euro officially replaced the national currencies of 19 European countries in March 2002. Many European territories around the world also use the euro. However, there are still many countries within the European continent that have not adopted the euro.

The East Caribbean dollar is the most-used currency in the Caribbean region, followed closely by the US dollar and the euro. Several Caribbean countries use their own currencies as well. These countries include:

Countries in South America include both the continental regions and the neighboring territories. Most South American countries have their own currencies, except for Bonaire, Ecuador, and Saba, which use the US dollar. Curacao is controlled by the Netherlands and uses the Netherlands Antillean guilder, while French Guiana uses the euro like France.

Would you like to learn more about countries around the world? Check out an article on Canadian province abbreviations. You can also discover which countries have democratic governments with an informative resource.