Electrical abbreviations save time and preserve safety. They are used in industries such as automotive and construction, plus in anything to do with electrical wiring, electronic device repair, electronic device manufacturing, and telephony. Because electrical work involves significant cost and potential safety risks, understanding these abbreviations and acronyms is important for everyone involved. 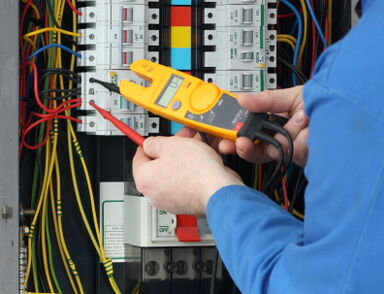 Electrical work involves space constraints of many devices and panels. Since it doesn't make sense to write out the full terms every time, shorter abbreviations are used for various circuits, conduits, sizes, standardized tools, and more. Here are several examples of common electrical wiring abbreviations:

Different electrical wires perform different tasks. Colored wires are found in branch circuits, which are the wiring between a circuit breaker or other protective device and an electrical load. If you’re unsure about the color wire you’re working with, take a look at these abbreviations and definitions.

Most homes and offices use 120, 208, and 240 volt AC wiring systems. These systems are found in outlets or other electrical circuits throughout the home. The colors of these lower voltage wires include:

Heavy-duty industrial equipment operates at a higher voltage (277/480 volts). For that reason, you’ll find different colors marking these wires than you’ll find in the walls of your house or office. These wire colors are:

Even if you’re dealing with a wire that you don’t think is live, it’s best to leave it alone. Consult an electrician or other professional if you’re not sure about the wiring system you have.

If you’d like to learn more about electricity and electrical energy, there are many helpful articles to steer you in the right direction. You can find everyday examples of electrical energy with a list of household items. Or, if you’re interested in other types of kinetic energy, check out a resource that explains more about mechanical, radiant, thermal, and sound energy.