Understanding the basics of American football starts with learning the different positions on a team. The football abbreviations for many of these positions are used more often than their actual names. 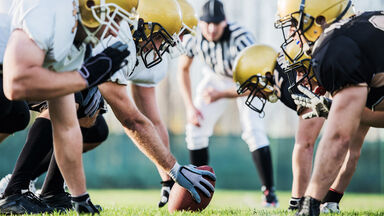 Whether you play youth football or in the NFL (National Football League), the positions on a football team are the same. There can only be 11 players from one team on the field during plays.

The offensive line, or “OL,” and other players on the field for your team when you start a set of downs with the ball, are collectively called the offense. This is sometimes abbreviated as “O.”

The defensive line, or “DL,” and other players on the field for your team when you don’t have the ball at the start of a play are collectively called the defense. This is often abbreviated as the “D.”

During punts, field goals, and kickoffs, a group of specialty players take the field. This is called your special teams.

While Americans call one game football, most of the rest of the world calls a different game football. What’s known as football around the world is called soccer in the United States of America. This type of football also uses abbreviations for player positions.

Just like in American football, there are 11 players on the field during a soccer match. Many of them work in positions where they try to stop the other team from scoring.

Midfielders need to be good at both offense and defense because they typically play toward the middle of the field and near their opponent’s goal.

Forwards are the players who play closer to their opponent’s goal and try to score goals.

Run in for a Touchdown!

Commonly used abbreviations, like those used in football, help people communicate more quickly and efficiently. If you’re looking for football position acronyms, you won’t find any. The main difference between abbreviations and acronyms is that acronyms spell out a new word, while abbreviations don’t. Run with that!