If you live in the US, you might know your state abbreviation or state code. But, did you know that countries have two-letter codes that are recognized internationally too? Well, they do. Learn what all of the country codes are for Europe. You even find the country calling codes for Europe. 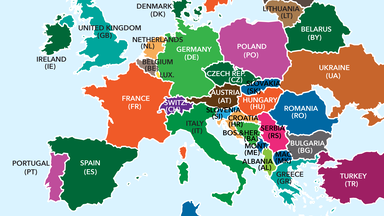 Just like North America, the continent of Europe is full of country codes. These codes work to make paperwork a lot easier, since you don’t have to write out the full name for every country. The International Organization for Standardization (ISO) publishes these codes, which come in 2-letter and 3-letter formats.

While the European Union might commonly use the ISO alpha-2 codes, it’s important to look at both types when discussing EU country codes. Review the 2-letter and 3-letter country codes for the EU in alphabetical order by country. And, just so all your country codes are covered, you’ll find the country calling codes too!

Since the EU isn’t all there is to Europe, it’s important to know the other country codes of Europe as well. These include partially recognized countries that have a code, like Kosovo, and border countries, like Turkey and Armenia. Arranged in alphabetical order by country, the rest of the European country and calling codes are here.

What Are Country Codes For?

European country codes have a plethora of purposes that go beyond government paperwork. These codes can be used in mapping and geographic information systems. Trying to fit the entire country’s name on a map could be a mess.

They are also great when it comes to large statistics for the European continent or the world at large. Knowing the European country code can make the relevant numbers a breeze to find.

Since it wouldn’t make much sense to let everyone just pick their own country codes, the creation of these codes is regulated and created by the ISO to be nationally recognized. While only the codes for Europe are covered here, these country code abbreviations are designated for every continent.

For every country or partial country that is recognized in Europe, there is a code. The most recognized country code is just two letters, but there are other codes available. Now that you’ve explored European country codes, check out government acronyms. These organization abbreviations actually create a new word.