For centuries, humans have explored the vast oceans of the world and discovered faraway lands and mysterious sea creatures (probably whales covered in kelp). Even if you don’t plan to hoist sails or batten down hatches any time soon, it doesn’t hurt to learn some commonly used nautical terms, acronyms, and abbreviations to impress your friends and maybe even glide those glassy seas yourself. 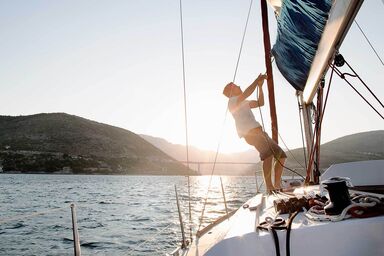 A ship can be as complicated as (and sometimes more complicated than) any other vehicle of the land or air, so knowing all the parts and pieces of your seafaring vessel is essential for any aspiring sailor.

Forget your left and right. When sailing the high seas, you’re not always facing the bow of your ship, nor are you always above deck. Directional nautical words keep you and your vessel from getting all turned around.

Weather plays an important role in sailing on any body of water. It can pose a danger, but weather is also the means of navigating and propelling certain vessels. That naturally comes with a little slang, too.

Measuring distances is an essential component of navigating on the seas. Remember, there aren’t any roads or mile markers on the ocean. You thankfully have plenty of tools at your disposal to measure those distances and maintain safety.

From pirate sailing terms to modern sailing slang, you need to know at least some good slang to make your way around a ship and sound like a real sailor.

Not all people and passengers on a ship have the same role. Aside from creating a natural hierarchy for responsibility, knowing who does what ensures that you’re actually talking to the right person and not mistaking a stowaway for a captain.

While many nautical terms have endured the tests of time, others have fallen to the wayside or become obsolete. Still, if you want to be a true sailor, it doesn’t hurt to keep some of that older salty language in mind.

The ocean is one of the busiest causeways in the world, responsible for shipments of food, toys, and expensive sports cars. To ensure safety and limit any funny business, all that maritime travel is regulated by various international groups and organizations.

Acronyms and Abbreviations for Nautical Tools, Systems, and Acts

Ships and maritime technology have come a long way since the days of scurvy and buried treasure. From advanced navigational systems to safety features, knowing the abbreviations of these nautical tools is essential to surviving the seas.