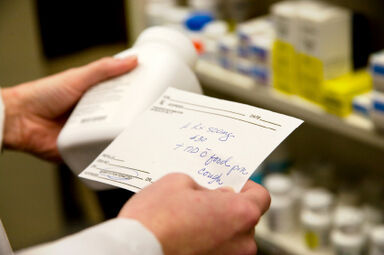 Some abbreviations look very similar to each other. For example, HS means “half strength,” but “hs” means hora somni, or “at bedtime.” It’s important to note that each abbreviation depends on whether it’s upper-case or lower-case, as well as the context of the prescription.

When your doctor hands you a prescription, it may seem unreadable. But knowing what the abbreviations mean is important – and may even save your life in case of an error. Here are some basic abbreviations to know before handing a prescription to a pharmacist.

If a doctor wants you to take the medication in a particular way, that will be indicated in the subscription part of the prescription. It details which bodily route the patient will use for the medication and how the medication should be dispensed. Some examples include:

How and How Often to Take Prescriptions

One important detail to know is how often you need to take your prescription. You also need to know whether your prescription should be taken with food, with water, or by itself. Read these common abbreviations for how and how often a patient should take their medication.

Abbreviations for Side Effects

Knowing the potential side effects of a medication is important for patients. It can help them decide whether the benefits of taking the medication outweigh the risks. The following codes are used as warning about side effects, especially for people with certain medical conditions that may be affected by the medication.

Parts of a Prescription

A prescription contains handwritten instructions for the dispensing and administering of medications. It can be more than an order for drugs, as it can also include instructions for a therapist, the patient, nurse, caretaker, pharmacist or a lab technician for orders for lab tests, X-rays, and other assessments.

Prescriptions vary from state to state and doctor to doctor. In some cases, doctors will use different terminology to describe what they want the pharmacist to do. For example:

Why Are Prescriptions in Latin?

Historically, prescriptions were written in Latin and are still written that way today. But why would the medical industry rely on a language that is not commonly spoken today? There are two major reasons:

The word prescription comes from the Latin word praescriptus. It has the prefix pre-, which means “before,” and the term script, which means “writing,” indicating that a prescription has to be written before a drug is compounded.

So where does the prescription symbol Rx come from? Some historians believe that its origin lies with ancient patients and doctors asking for protection from either the Eye of Horus or the Roman god Jupiter. Others believe that Rx is short for the Latin recipe, which means “to take.” Either way, Rx is a universal symbol to indicate a prescription.

Check With Your Doctor

If you’d like to learn more medical terminology, check out a list of medical abbreviations that you might read or hear from doctors and nurses. You can also read through definitions of common medical suffixes that can help you understand your diagnosis. And if you need a break from complex Latin vocabulary, read through some funny medical puns that are sure to tickle your funny bone!