What Is SoHo Short For? Neighborhood Names to Know

SoHo is a common acronym used mostly to describe areas or neighborhoods in cities. Explore places and things shortened to SoHo around the world. 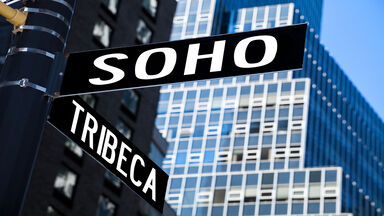 If you’re talking about New York City neighborhoods, SoHo is an acronym that stands for South of Houston Street. The “So” comes from “South” and the “Ho” comes from “Houston.” This area of Manhattan is best known for the arts and shopping.

SoHo in lower Manhattan includes the area from Lafayette St. to the Hudson River and West Houston St. to Canal St. This SoHo is spelled with a capital “S” and a capital “H.”

The culture of New York City’s SoHo district has also inspired a fashion style known as SoHo chic or SoHo style. In this case, SoHo still stands for South of Houston St. SoHo style is marked by simplicity, effortlessness, and elegance.

There’s also an area in London, England known as Soho. You can find Soho in London’s West End covering about a one square mile area. This Soho is spelled with a capital “S” only. Soho London is known as an entertainment district.

The origins of the name Soho for this area aren’t confirmed, but it’s believed to be named after a 17th century hunting cry. The area was a known hunting ground. Soho London claims to be the first region in the world to go by the name Soho.

This is a multicultural nightlife hotspot in Hong Kong. Hong Kong’s SoHo, like New York City’s, is an acronym that is spelled with a capital “S” and a capital “H.”

In Tasmania, SoHo is an acronym that represents the Hobart suburb of South Hobart. The “So” is from “South” and the “Ho” is from “Hobart.”

In Tasmania, you’ll see many businesses with various spellings of the abbreviation SoHo. Arts from this area are branded as SOHO Arts with all letters of the word capitalized while apartments, rentals, and hotels use either Soho or SoHo.

In slang terms, SOHO stands for Small Office/Home Office. The acronym represents the home offices of people who work remotely or are self-employed. This SOHO is spelled with all capital letters.

SoHo has become a popular location acronym in cities and countries around the world. Check out other real estate acronyms to see what other cool neighborhoods with cool nicknames you could explore.