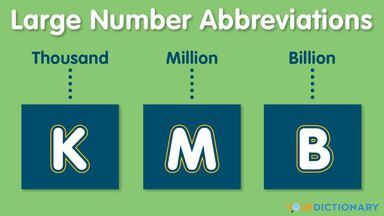 While the letter "k" is the most common abbreviation, there are a few different ways to abbreviate thousand.

You can use any of the above abbreviations for thousand options when referring to thousands in writing.

There are even more ways to abbreviate million than there are for thousand.

Review a few examples of sentences that feature common abbreviations for million.

There are a few different ways to abbreviate billion, most are similar to the million abbreviations.

Review a few examples of sentences that feature common abbreviations for billion.

Financial and accounting statements historically used a different approach to abbreviating thousand and million. This approach combines Roman numerals and abbreviations. It has become less common due to the potential for confusion. If you do use these abbreviations, be sure to clearly define them in the text.

Readers could easily interpret this as a $12 million loss, though the financial professional might mean $12,000.

On financial statements that used M to indicate thousand, the common practice was to abbreviate million as MM. This is an abbreviation based on a calculation. It stands for 1000 times 1000 (which would calculate out to one million), this is abbreviated to M * M, but without the multiplication sign, thus becoming MM.

Now that you know several large number abbreviations, you have access to several options you can use in your reports or other forms of writing. You may also find it helpful to review measurement abbreviations for common units. Expand your ability to communicate about quantities and amounts by getting to know various names and expressions for large numbers.