Learning What TBH Stands For and How to Use It

TBH, if you’re online in the 21st century, you should probably already know what TBH means. But even if you knew what the popular texting initialism meant a few years ago, you may not be aware of how it’s become a sort of attention currency on social media. 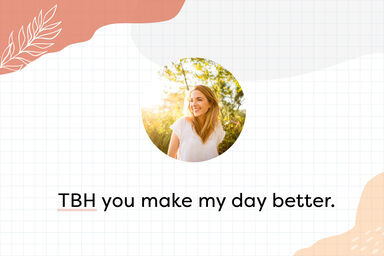 TBH: To Be Honest

TBH stands for “To Be Honest” and often appears before someone breaks honest news that a listener may not want to hear (“TBH, you don’t look cute in that dress.”). You may also see it before a poster’s confession (“TBH, I’ve never seen Star Wars.”) or after a flattering statement (“I love your Star Wars dress, TBH.”).

Other Ways to Say TBH

Want to use TBH, but don’t want it to be confused with the compliment version of TBH? Try out:

A more traditional use of TBH is to be frank or blunt with someone, as in “If I’m being honest” or “To tell the truth,” even to the point of snarkiness. However, unlike many (most) online trends, TBH has actually gotten sweeter with age.

Gen Z has taken to using TBH (lowercase or capitalized) as a way to trade compliments on social media. They’ll post a selfie with the caption “give a TBH” or “Post a tbh and I’ll return,” and their comment section fills up with compliments like “tbh you are really pretty” or “tbh your smile is so handsome.” The original poster then returns the favor by adding TBH compliments to the commenters’ recent pictures. Like many Gen Z attributes, the new incarnation of TBH is direct but also more fulfilling than its predecessor.

How To Give a TBH to Anyone

Want to give a TBH, but aren’t sure where to start? Depending on who’s posting, there’s a way to TBH everyone in a platonic (and not stalkerish) way.

TBH is not the time to flirt or come on to someone. Take that business elsewhere (that’s what DMs are for).

Get Hip With the Quips

Sound like you know what you’re talking about online (or at least learn what others are saying to you) with: