Nazi: Meaning and Origin of the Word

The Nazi party was the political and military power headed by Adolf Hitler before and during World War II. But what does Nazi stand for in English, and why do people still use it today? Learn all about the meaning and history of the word Nazi, including important facts that are still relevant in modern politics. 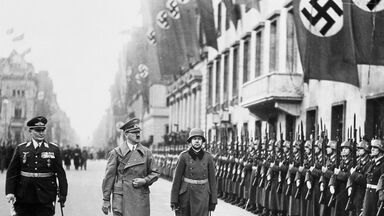 What Does Nazi Stand For?

The word Nazi, meaning "a member of the National Socialist German Workers' Party," is short for the German term for National Socialist (Nationalsozialist). The full German name for the party is Nationalsozialistische Deutsche Arbeiterparte, or NSDAP. Along with Adolf Hitler, the Nazi party rose to power in the years leading up to World War II, committed war atrocities and attempted genocide during the war before being defeated by the Allied powers in 1945.

Colloquially, the term can refer to someone who is extremely zealous about something, such as a "grammar nazi" or a "rules nazi." However, the word is typically lowercase in these instances. Historically and politically, Nazi with a capital "N" refers to a person who follows the principles of Nazism.

Although the word socialist appears in the party title for Nazism, the Nazi ideology doesn't have much to do with far-left traditional socialism. Hitler's definition of National Socialism, a platform that serves one's country only, is closer to far-right fascism and authoritarianism on the ideological spectrum.

Attributes of Nazi ideology include:

Although Nazi Germany only existed for 12 years (1933-1945), it made an enormous impact on twentieth-century geopolitical relations. Even the threat of a far-right government's approach to Nazism warrants attention from democratic countries around the world.

Who Coined the Word Nazi?

While it's difficult to know who exactly coined the word "Nazi" as a nickname for Hitler's party, historians generally agree that it wasn't Hitler. In fact, Hitler disliked the term because it was used as an insult by his enemies. As Mark Forsyth writes in The Etymologicon, Nazi had long been a derogatory nickname for the Bavarian peasant name Ignatius, which referred to a stereotypically unintelligent and clumsy person. It transferred well to the German pronunciation of Nationalsozialist. As anti-Hitler Germans fled the country in the 1930s and 1940s, the teasing nickname for Hitler's party became part of international vocabulary.

Party members attempted to reclaim the nickname for their own purposes. Joseph Goebbels, a Nazi propagandist, wrote a pamphlet called Der Nazi-Sozi in 1926 to reclaim the nickname. Leopold von Mildenstein did the same in Ein Nazi fährt nach Palästina in 1934. Some members of the party used the colloquial term, but for the most part, they referred to each other as Nationalsozialisten (National Socialists).

What Does SS Stand For?

When you see the letters SS in reference to Nazis or World War II, it stands for Schutzstaffel ("protective squad" or "protective eschelon"). The SS was a paramilitary group originally tasked with protecting Hitler and the higher-ranking Nazi officers. It evolved from Hitler's private army, the SA (Sturmabteilung or "assault division"), also known as "brownshirts" or "stormtroopers." One of the most prominent SS members was Heinrich Himmler, who commanded the SS and was responsible for splitting the SS from the SA.

As World War II progressed, the SS grew to over 250,000 members and split into subdivisions, including SS Verfügungstruppen ("Dispositional troops"), Totenkopfverbande ("Death's Head Unit") and Waffen SS ("Armed SS"). It worked with Germany's secret state police (Geheime Staatspolizei or "Gestapo") to carry out mass executions, arrest political enemies and operate concentration camps. During the Nuremberg Trials after World War II, the SS was found to be a criminal organization guilty of committing war crimes during the Holocaust.

What Does Neo-Nazi Stand For?

The prefix neo- means "new." Neo-Nazi is a term that describes "new Nazis" — modern political activists who share the core beliefs of World War II-era Nazism. Another common term for a neo-Nazi is "white supremacist," which indicates that a person values members of the white race above all other races.

Unlike traditional Nazis, neo-Nazis value personal freedom and the free market, and they are not a global political force. However, similar to Nazis from the 1930s, neo-Nazi groups are found to be vocal and violent against non-white and non-Christian groups, which is why many neo-Nazi organizations are considered to be domestic terrorists.

The Legacy of Nazism

While it would be convenient to leave the memories of Nazism in history, the party's beliefs live on. In the decades since the fall of Nazi Germany, individuals, small groups and even major governments have veered toward the same nationalist and xenophobic philosophies as those held by Nazis. Learning more about other fascist governments in history can round out our knowledge on how these forces take power — and how concerned parties can take it back.