Origin of Xmas: More Than an Abbreviation

You may be surprised to learn that the origin of Xmas dates back nearly 1,000 years. This very old, and sometimes controversial, abbreviation actually has its roots in the Greek language. 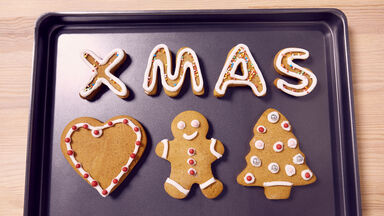 A Christmas Abbreviation With Greek Origins

Like many words in the English language, Xmas has its origins in Greek. The Greek word for Christ is Christós, and the first letter of Christós is Chi. Written in the Greek alphabet, Chi is Χ. Over time, X became an abbreviation for Christ, and Christmas became Xmas.

A Timeline of Xmas: From Scholarly Shorthand to Casual Use

New words and abbreviations don’t enter common usage overnight. It takes multiple uses for them to become standard practice or an easily recognized term. Here’s the 1,000-year progression Xmas took in its journey to becoming a Christmas abbreviation.

The first use of this abbreviation dates from A.D. 1021 when a scholar used Xp̄es for Christmas in the Anglo Saxon Chronicles. Writing on expensive parchment paper, the scholar was likely trying to be frugal and save space on the page.

A letter dated November 21, 1551 by King Edward VI and published in Illustrations of British History, Biography, and Manners by Edmund Lodge in 1771, used the Christmas abbreviation “X’temmas.”

“We believe that he shall have, during the tyme of his s’rvice in th’ office of Chauncelor there, the augmentac’on of his fee to an other sum’e of oon hundreth pounds by the yeare more than he hath, to be payd likewise as his other fee is payd, from X’temmas next following …”

In 1799, the poet Samual Taylor Coleridge used “Xstmas” as a Christmas abbreviation in a letter, dated December 31, 1799. Here, he refers to his famous poem "A Christmas Carol":

“My Xstmas Carol is a quaint performance.”

Coleridge also used the abbreviation “Xmas” in a letter he wrote in December 1801.

“On Xmas day I breakfasted with Davy, with the intention of dining with you …”

Coleridge was not alone in using this Christmas abbreviation. Lewis Carroll also used “Xmas” in a letter in 1864.

“I should be very glad if you could help me in fixing on a name for my fairy-tale, which Mr. Tenniel … is now illustrating for me, and which I hope to get published before Xmas.”

Controversy About the Origin of Xmas

Some modern audiences feel Xmas is a disrespectful abbreviation for Christmas, mistakenly assuming the X is meant to replace Christ with a secular symbol. However, the truth is just the opposite: the X is an ancient shorthand for Christ.

Why Do People Say Xmas?

Like all common abbreviations, Xmas is a shortened version of a longer word. When people are short on space or need to write or type quickly, Xmas gets their point across more efficiently. It is unlikely that people say Xmas to offend others.

Still, proper etiquette around the use of Xmas is a bit murky. There are rules for using abbreviations, and Xmas has some restrictions. Because some people may find it offensive, it’s best to avoid its use in greeting cards and Christmas messages. In many Christmas-related sentences and essays, depending on the context, Xmas can also feel too informal. When possible, spell it out instead.

The Meaning Is the Same

Whether you write Xmas or Christmas, the meaning is the same—it’s all about how the wording will be received. If you need an alternative, learn about other words you can use to wish someone a merry Christmas.