Acronym vs. Initialism vs. Abbreviation With Examples

Acronyms, initialisms, abbreviations... say what? When it comes to the wonderful world of abbreviations, they are everywhere. Abbreviations are just words or phrases that are shortened. But, what is the difference between an acronym and initialism? It comes down to how you pronounce an abbreviation that is going to make it an initialism, an acronym or both. 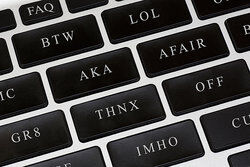 Initialisms vs. Acronyms vs. Abbreviations

You’ve now walked into the fun world of abbreviations. In short:

An abbreviation is when a phrase or word is shortened to a word or letters.

It could be abbreviated into one sound like “Rom.” for Romeo and Juliet. Or, it could be shortened to its first letters like NRA for the National Rifle Association. When it comes to abbreviations, you will commonly see two different types: initialisms and acronyms. So, what’s the difference between an acronym and initialism?

To truly understand the difference between an initialism and acronym, you can look at examples of each in business, medicine and politics/government. You can then see how some abbreviations can be both initialisms and acronyms.

Initialisms are a common component of both official and conversational English. Initialisms are featured in politics, corporate branding, scientific and medical terminology, and casual conversation alike. Review a few common examples.

Businesses frequently use initialisms as part of their branding, usually as a way of improving out-of-date, extra long, or not-quite-global phrasing.

Doctors and nurses are busy. This means that they don’t have time to say or write all the complicated words that are found in the field of medicine. Therefore, initialisms can come in handy. Check out a few initialisms used in the medical field.

Initialisms in government are so common that they’ve coined their own joke: “alphabet soup.” The use of initialisms in politics around the world reflects a shared need to save time and space without losing specificity.

Now, it’s time for acronyms. While not as common in some areas, you can find acronyms all over the board or world for that matter. Check out how acronyms compare to initialisms.

Big businesses might use acronyms to make them stand out or just to shorten a long name. A few famous examples include:

Medicine is full of complicated words and phrases that doctors just don’t have time for. While you’ll find initialisms a plenty, acronyms are right in the thick of it too.

The government is not without its acronyms. You can find them all over the place from the different departments to laws. Check out a few that you might already know.

It is the nature of active, living languages that as soon as a rule is set down, exceptions arise. Initialisms and acronyms are no different. English speakers split the difference between initialisms and acronyms simply by pronouncing certain abbreviations per their individual letters, and other times as single words.

Letters in a Line