What Does ASMR Stand For? The Breakthrough of a Video Genre

Many people love the sound of rain tapping on the roof or watching the ocean tide ebb and flow. But other sensory experiences, such as gentle scratching sounds or watching cake batter poured into a dish, can be just as relaxing and therapeutic. Enter the ASMR video genre — also known as your new bedtime routine. 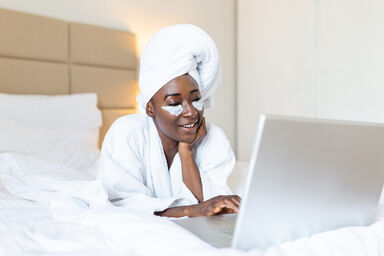 The initialism ASMR stands for “autonomous sensory meridian response” and describes a pleasant tingling sensation in response to a sensory trigger. It’s often described as “sounds that feel good” and provides health benefits for anxiety, insomnia and even chronic pain, Those who enjoy sleeping with white noise or instantly relax when someone strokes their face know exactly how ASMR feels.

ASMR appeared online in 2012 and has steadily gained popularity in the years since, particularly as a synonym for “calming” or “stimulating.” However, ASMR is a very specific phenomenon, and those who experience it require specific triggers to reach ultimate relaxation. Finding someone to make soothing noises while you sleep can be a little tricky — unless you happen to live in the 21st century and have access to YouTube.

The Most Soothing Video Genre

For some, the sound of tapping fingernails is unbelievably soothing. For others, crisply folded towels immediately lowers their blood pressure. No matter your sensory trigger, there’s an ASMR video for it. Millions of online videos combine auditory and visual stimuli to create repetitive and satisfying ASMR experiences.

Sounds in an ASMR video may include:

Most ASMR videos are centered around the idea of pampering the viewer and focusing on them directly. To create this illusion, ASMR videos include visuals like:

These are only a few of the triggers found in ASMR videos. If they don’t work for you, try another one (but only if you have some time for a nap).

Does ASMR Work for Everyone?

While the popularity of these videos would suggest that ASMR is a universal experience, that’s not the case. There’s some evidence that those with synesthesia have a more intense reaction to ASMR. Some people experience nothing when they watch the same ASMR video that puts viewers right to sleep, and others even become intensely annoyed or agitated when they hear these repetitive noises. This reaction, known as misophonia, is the negative form of ASMR — instead of pleasure, those with misophonia experience irritation.

If you find yourself more confused than relaxed by ASMR, it’s possible that you just haven’t found the right sensory trigger. Stay mindful in your environment and notice what sounds, visuals or feelings really relax you, and try to find a corresponding ASMR video. Chances are, it exists!

Relax and Enjoy the 21st Century

Once you’ve finished a nice ASMR session, shore up your modern abbreviations with: