What Does BFF Mean? The Abbreviation Explained

BFF is an abbreviation that means "Best Friend/Friends Forever." It is regularly used in texting and on social media between friends. Whether you want to show your friend that you appreciate them or you want to tell the world how great your BFF is, this abbreviation is one trend that never goes out of style. 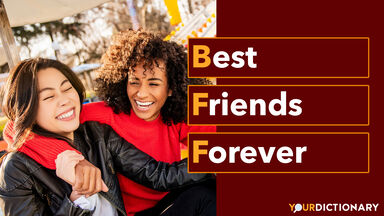 BFF as an Abbreviation

BFF (also written bff) is an initialism. It is an extension of the term BF, which means "best friend" but with an additional "f" to emphasize that this person will be your friend forever. It is pronounced with each letter sounded out individually and written with no periods. It’s most commonly used in texting among female friends in their teens but can be used by all ages and genders. It is also popular on platforms such as Twitter, Snapchat, Instagram, and more.

The phrase “best friends forever” can likely be traced back to the 1980s. However, BFF was popularized in 1997 when the character Phoebe Buffay said it in season 3, episode 25 of the hit show Friends. It was added to the New Oxford American Dictionary in 2010. The abbreviation caught on and gained popularity throughout the 2000s, appearing in other pop culture and peaking in 2008 and again in 2018.

Other Meanings of BFF

While "best friends forever" is the original and most popular meaning of BFF, other meanings have been applied to the abbreviation.

Examples and Usage of BFF

BFF is used in casual conversations and texts between close friends. You can use this term to show your friend how much they mean to you or to emphasize how long your friendship has lasted.

Some examples of how you can use BFF in context are:

If you want some other ways to address your friends via text, explore these examples.