What Does BIPOC Mean? The Abbreviation Explained 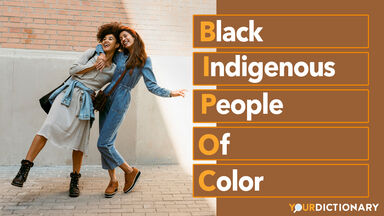 BIPOC as an Abbreviation

The term BIPOC (pronounced BYE-pock) is primarily used online, particularly in social media. It’s a general term that both encompasses the non-white community in the U.S. and separates the Black and Indigenous experiences as unique from other people of color (POC).

The letters in BIPOC represent:

Many users believe that the acronym represents "Bisexual People of Color," due to the BI present before POC. However, they are incorrect. When you use the term BIPOC, you are acknowledging the specific racism and discrimination experienced by the Black community and the invisibility and erasure often experienced by Indigenous people.

The term BIPOC surged in popularity after George Floyd was killed by police officer Derek Chauvin on May 25, 2020. Protests for racial justice and police reform appeared all over the United States, bringing new attention to the experiences of the Black community in America.

Since the 2020 protests, BIPOC has replaced both POC and “minority” as a way to describe non-white people. However, there has been much debate surrounding BIPOC’s use. Some believe that it’s an inclusive and empowering way to indicate that people of all non-white ethnicities can support each other through adversity. Others contend that BIPOC, like POC before it, is a euphemistic marketing slogan that only adds to the culture of invisibility for the people it represents.

You’re likely to find BIPOC mentioned in articles about racial protests and social justice. You may also see it in a hashtag (#BIPOC) after a Tweet or social media post supporting non-white community members. Typically, BIPOC is used as an adjective, but you’ll also see it used as a noun.

When using BIPOC in a sentence, the intent should be to cultivate an inclusive environment. Specifying that you encourage BIPOC applicants for a job or writing submission, for example, shows that you seek to represent voices of all backgrounds. Cultivating a list of BIPOC creators can help readers see themselves reflected in art or to see the world through different perspectives. Never use BIPOC to replace naming specific people or experiences as Black or Indigenous. The term should not serve as a blanket term for every person of a non-white ethnicity.

Examples of the term BIPOC in the media include: