What Does BLM Stand For? Overview of the Meaning and Origin

The abbreviation BLM can often be found in the news and the media. Some people feel empowered by those three letters, while others feel threatened. So what does BLM stand for? Learn about the meaning, history and mission of BLM so you can carry that knowledge forward. 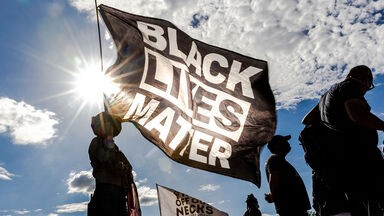 You may see this slogan on protest signs and social media; however, BLM is actually a decentralized grassroots movement for social justice. BLM stands for "Black Lives Matter." The phrase is meant to affirm that the lives of Black Americans, who are believed to be disproportionately discriminated against in American society, are in fact worthwhile. It's most commonly invoked in cases of police violence against Black Americans, which often end with the death of the Black person and no real consequences for the police officers.

The Origin of BLM

BLM, or #BlackLivesMatter as it's known on social media, began in 2013 when George Zimmerman was acquitted of the murder of 17-year-old Trayvon Martin. Political organizers Alicia Garza, Patrisse Cullors and Opal Tometi founded Black Lives Matter as a movement that focused on the needs of all Black Americans, not just Black heterosexual men. While the movement started small, it grew very quickly in both numbers and attention.

BLM gained national attention after the August 9, 2014 police killing of 18-year-old Michael Brown, and the subsequent protests and unrest in Ferguson, Missouri. Police and protestors clashed in a series of BLM-organized demonstrations over the next few weeks, and again in November 2014 when the police officer, Darren Wilson, was not indicted for the killing.

Throughout the years, BLM became an organizing tool to protest the police killings of Black people including Eric Garner, Tamir Rice, Tanisha Anderson, Walter Scott, Freddie Gray, and Sandra Bland. In 2020, local chapters of BLM again organized marches and demonstrations after the police killing of George Floyd in Minnesota. These protests inspired citizens around the country — and soon, around the world — to take to the streets and protest the system that, in their perception, continued to devalue the lives of Black Americans.

Today, those involved in BLM continue to advocate for equal rights, social justice and an end to systemic discrimination. While they are most commonly known for their protests, those in the BLM movement work against the less visible forces of discrimination, as well. Chapters of BLM support Black-owned businesses and legislation aimed at providing economic equity to Black communities. They advocate for police reform and racially diverse representation in various fields. BLM may seem like a new movement, but it's carrying forward the vision and beliefs of earlier civil rights activists, including Rosa Parks and Dr. Martin Luther King, Jr.

Both BLM and Black Lives Matter are loaded terms in today's society. Those who support BLM feel strongly enough about it to demonstrate in the streets, while those who oppose BLM defend countermovements against it. Some of the misconceptions surrounding BLM are merely misunderstandings, while others are part of disinformation campaigns to sow discord. Take a look at some common misconceptions surrounding BLM to check your own understanding.

Another countermovement to BLM supports the lives of police officers ("blue lives"), suggesting that the two communities should be at odds with each other. While BLM advocates for justice when a police officer has used excessive force, the movement is not fundamentally anti-police. Many advocates of BLM stress the importance of restructuring the American police system, including defunding the police (which means re-examining how police departments operate with public funds and allocating some of those funds to other social programs).

BLM as an Organization

Some people believe that, like the civil rights movement of the 1960s, BLM is a centralized organization with specific goals. However, BLM is decentralized; there is no central leadership or structure. The philosophy has become a global movement that affirms the rights of Black lives as a vital part of society. BLM events and protests are typically organized by smaller local organizations, not a central leader, as there are more than 40 member-led chapters of BLM around the world.

BLM Does Not Advocate for Racial Supremacy

Another misconception surrounding the BLM movement is that its participants want to create a society that only consists of Black members. BLM advocates for the rights of all Black people to participate and contribute to society, as well as the rights of all women, members of the LGBTQ+ community, members of the disabled community, undocumented workers, those with criminal records, and anyone else who finds themselves at a disadvantage due to their identity. Anyone of any race can become an ally of BLM if they agree with its central message: Black Lives Matter.

Civil Rights Is an Ongoing Struggle

It may be easy to believe that Martin Luther King, Jr. finished the job of securing civil rights for the Black community in America. While his legacy was profound, Dr. King was only one participant in the constant fight for equal rights. BLM brings the spirit and philosophy of the civil rights movement to modern-day social justice and equity needs. Read about more examples of civil disobedience in the modern era. You can also examine BLM in the context of social conflict theory to see how it fits into classical social beliefs.