What Does CEO Stand For? Basic Guide to C-Suite Titles

You may know that a CEO is the highest leadership level in the business world. But what does CEO stand for, and how does it relate to other C-suite titles? Learn the meaning of CEO and how it's used in business, online slang and alongside other positions. 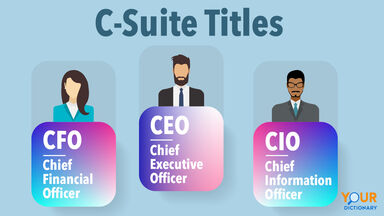 What Does CEO Stand For?

The abbreviation CEO stands for Chief Executive Officer. In the business world, this job title is typically reserved for the highest-ranking executive or leader in a company or other type of business entity, such as a hospital or nonprofit organization. For organizations that have a position with this title, the other members of the executive team report directly to the CEO.

There are a number of well-known CEOs in the business world. These business leaders include those who currently hold the role of CEO and those who have opted to step down from their organizations' helm.

While CEO does still stand for Chief Executive Officer in online and slang usage, it is not a formal designation that involves prestige or responsibility. Instead, it just means that someone is really good at something.

For example, commenters on TikTok who are impressed with the antics of TikTokkers will often leave comments naming the person in the video as the CEO of whatever random thing the person was doing. Someone could be named the CEO of fake eyelashes or the CEO of bad dancing. Such modern slang usage is all in good fun, but, of course, should not be taken literally.

Other C-Suite Titles and Abbreviations

While CEO might stand for the highest-ranking executive role in an organization, it's usually not the only executive position in a company. The various executive-level jobs that start with the word chief are referred to as C-suite jobs. The phrase refers to the practice of locating executive offices in a special area (such as a suite) that's removed from the other employees. The various C-suite positions each have their own acronym.

This list doesn't encompass every possible C-suite abbreviation or job title that might exist. An organization may classify any roles it wants in the C-suite category or none at all.

Learn the Language of Business

Now that you're familiar with many C-suite titles, it's a great time to boost your overall business vocabulary. Take the time to learn some more business word abbreviations. Then, build your business communication vocabulary even more by mastering some examples of workplace jargon.