What Does the D in D-Day Stand For? Demystifying the Term

The 1944 Allied invasion of German-occupied France is known as D-Day. It's remembered as one of the most important battles in modern history and a turning point of World War II. But what does the "D" in D-Day stand for, and why does the nickname signify that date? Keep reading to learn more about this important abbreviation in World War II history. 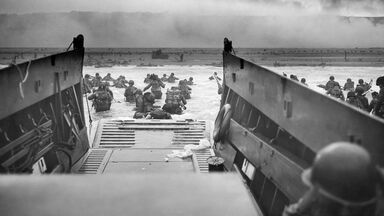 The Meaning of D-Day

The answer to what D-Day stands for is simpler than it seems. The phrase is part of common military terminology, and means "the day an operation will happen." A similar abbreviation is H-Hour, which indicates the exact hour the operation will occur. Therefore, the "D" in D-Day means "Day." Army personnel also use minus signs to show a countdown (D-3 means three days until the operation) and plus signs to indicate how many days have passed (D+1 means one day since the operation).

The Invasion of Normandy

Also known as the Battle of Normandy, Operation Overlord, Operation Neptune, and the Invasion of France, D-Day took place on June 6, 1944. France had been occupied by Nazi Germany in 1940 and the Allies had been planning a secret attack to liberate the country for many months.

The operation involved over 150,000 Allied troops from the United States, Britain and Canada storming the beaches of Normandy, France. Amphibious troops landed on the beach for a ground attack, while paratroopers landed behind enemy lines and armed aircraft provided support from the sky. Though the Allies sustained heavy losses of over 4,000 fatalities, they successfully defeated German forces and secured the beaches by June 11. Paris was liberated in August, and German troops were forced to withdraw from France.

Other Interpretations of D-Day

Because the events of June 6, 1944 were so momentous, it's hard to believe that D-Day is merely a generic Army term. There are several other ideas of what the "D" in D-Day stands for, which include:

There have been many D-Days before and since the June 6, 1944 invasion of Normandy. However, the term D-Day has become synonymous with Operation Overlord, so these other operations are typically known by their code names.

Many of these abbreviations, like D-Day, are generic Army designations. However, due to their historical significance, they are often known to commemorate these dates.

A Day of Remembrance

D-Day allows us to thank the veterans of the invasion of Normandy and to remember the soldiers fallen on its shores. World War II was just one of many wars in American history, but it affected every country around the globe. Learn more about military expressions, sayings and common phrases with these examples of military slang.