What Does FOMO Mean? The Abbreviation Explained

Have you ever sat alone at home, wondering if others are having fun without you? That feeling is called FOMO — “Fear of Missing Out.” FOMO is a popular text and conversational slang term that refers to that uncomfortable feeling of missing out on enjoyable experiences. 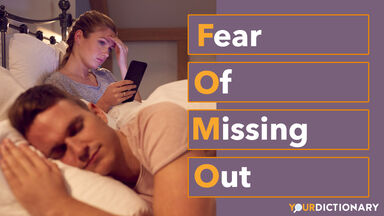 FOMO as an Abbreviation

FOMO is an acronym (pronounced FOH-moh) that serves as a trendy way to describe a common form of social anxiety. Prior to the 21st century, it was described as “keeping up with the Joneses,” an idiom that described comparing one’s social and economic status to their neighbors. It’s especially common in the context of social media, as it may seem that others are attending better events or living more interesting lives than you are.

FOMO was first used in 2004 by Harvard Business student Patrick McGinnis. McGinnis wrote “Social Theory at HBS: McGinnis’ Two FOs” in the Harvard Crimson to describe the sense of social anxiety that caused students to pack their social schedules with too many activities. That way, they could be sure they weren’t missing out on experiences — but they were stressing themselves out in the process.

As students graduated from Harvard and entered the workforce, both the concept and terminology of FOMO went with them. The term began trending in 2013 and is still a popular online term today. FOMO became even more prevalent with the growth of social media. With so many people’s lives on display, it was easier to believe that you were missing out. Studies show that FOMO related to social media use can lead to interrupted sleep, higher anxiety and increased dependence on social media.

Examples and Usage of FOMO

FOMO can be a lighthearted comment about feeling left out, or it can describe a more serious symptom of social anxiety. In recent years, FOMO has also become a common term in the business world.

Social media users typically use FOMO to describe the discomfort of not participating in an activity. They can also use FOMO when explaining why their schedules are full. For example:

FOMO has become a popular way to describe decisions and priorities in the business world. For example:

Along with FOMO, Patrick McGinnis described FOBO — “Fear of a Better Option” — in his article. FOBO refers to one’s reluctance to make plans just in case a better opportunity comes around. Other popular variations of FOMO include: