What Does FTFY Mean? The Abbreviation Explained

Like many examples of internet slang, FTFY can be a helpful comment or a sarcastic joke — depending on how it's used. FTFY stands for "Fixed That For You." It can be a nice way to help someone with a file attachment or grammar mistake, or it can be a way to win an online argument (or make fun of someone) by changing what another person said. 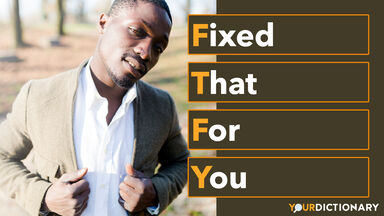 FTFY as an Abbreviation

FTFY is a common initialism, which is a type of abbreviation, on internet message boards, particularly Reddit. It usually appears as a reply after someone has edited a previous post with more accurate wording (in the writer's opinion). FTFY can also be used as lowercase ftfy or as #ftfy on social media.

The term FTFY started out in computer programming forums around 2005. At first, it was a genuine way to correct someone's technological mistake. FTFY became popular on Reddit a few years later with the creation of the /ftfy subreddit, which alters prominent headlines to tell a different story. FTFY isn't as popular today as it was in the early 2010s, but that may be because the full version — Fixed That For You — is becoming more well-known.

Other Meanings of FTFY

When you see FTFY on message boards, it probably means "fixed that for you." However, it's also sometimes known as an abbreviation for the profane expression "f*** this, f*** you." In academic circles, FTFY can also mean "full time, full year" or "first time, first year" to describe a student's enrollment status.

Examples and Usage of FTFY

When you reply to a message on a message board, the previous message appears in the text of your response. That gives posters the chance to change another poster's wording to make a point — usually the opposite of the point that the first poster was trying to make. They may use strikethrough text (like some examples below) to emphasize the word they're changing, or they may just rewrite the comment.

Some parts of the internet are less sarcastic than others, and FTFY might be a genuinely helpful response. For example, you might reply to a colleague's request for email help with "Your browser wasn't updated. ftfy" after solving the problem. Or, you may edit a typo in a friend's cover letter with "Spotted a 'your' instead of 'you're' so I FTFY." Since FTFY often has a rude meaning, make sure that the rest of your response has a helpful tone.

How else can you indicate that you changed someone's wording to make a point or edit a mistake? These abbreviations are very close to FTFY: