What Does FWIW Mean? The Abbreviation Explained

FWIW stands for “For What It’s Worth.” You can use this abbreviation when you want to add information in a text or message. Explore the origins and uses of FWIW. 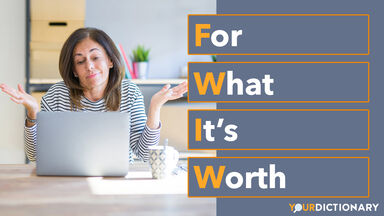 FWIW as an Abbreviation

FWIW is a versatile initialism, meaning every letter is pronounced when you say the abbreviation. You can use it in everyday texting or on social platforms. The use of FWIW can range from optimistic and helpful to sarcastic and humorous in tone depending on the context and your intended meaning.

The phrase “for what it's worth” is an idiom that has been around since at least the 1800s and was commonly used in economics to refer to the value of products. In modern times, it typically comes before or after information that the person considers important, whether that is positive news, a significant detail or just something they want to add to the conversation. While the exact origins of FWIW as an abbreviation are not known, it can be traced back to a 1989 list of computer jargon. Since then, FWIW has appeared regularly on social media, internet message boards and text messages.

Other Meanings of FWIW

Although FWIW most commonly stands for “for what it's worth,” there are other phrases that the abbreviation can occasionally be substituted for.

Examples and Usage of FWIW

The phrase "for what it’s worth" can be used in a variety of ways, but is typically used in casual conversation. It is usually placed at the beginning or end of a statement to emphasize the point being made. It's used for efficiency in writing, but not in speech.

Explore some examples of how to use FWIW in writing.

If you’re looking for an abbreviation that conveys a similar message to FWIW, you can use any of these terms at the beginning or end of a sentence.