What Does GIF Stand For? A Common Acronym Explained

If you’ve ever seen a moving picture online, chances are good that you’ve experienced the modern wonder of the GIF (graphics interchange format). Whether you want to add a little extra flavor to your conversations or simply need to show your friend a cartoon cat giving a thumbs up, the GIF has transformed into one of the most flexible and useful image formats on the internet. 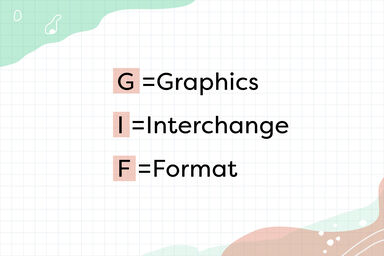 What Does GIF Stand For?

GIF stands for “graphics interchange format,” and it was initially developed in 1987 by Steve Wilhite, a computer scientist working at the internet service provider CompuServe. Unlike other graphical formats, GIFs are special because of an algorithm that allows for lossless compression of images. That basically means that you can shrink an image’s overall file size without sacrificing the quality of that image.

Technically, a GIF can be used for still images, and it served that exact purpose in its inception. Today, the minimal loss of image quality makes GIFs ideal for animations and looping videos. With an animated GIF, you’re essentially stapling several images together and going through them frame by frame, like a flipbook.

Pronouncing GIF: Am I Saying It Right?

One of the longstanding debates on the internet: how to pronounce GIF. Some people think GIF deserves a hard “g,” as in graphics or gift. Other people swear that GIF is pronounced with a soft “g,” as in giraffe or gelatin.

Creator Steve Wilhite agreed with the latter group, even going on record to say that GIF should be pronounced like “jif” with a soft “g.” However, some dictionaries say that both pronunciations are valid.

Ultimately, there isn’t a wrong way to say GIF, and regardless of how you pronounce it, just don’t be a jerk (or is it gerk?).

How and When to Use Animated GIFs

Most social media platforms and text apps have built-in GIF integration. These usually connect to Giphy (stylized as GIPHY), an online database that allows users to search for and embed GIFs in posts and messages.

GIFs are a great tool for everyday conversations:

Of course, as with any tool, GIFs have their time and place, and it’s important to know your audience. You don’t want to send your boss a GIF during a serious meeting. Quality also matters over quantity. Much like donuts and slices of cake, too many GIFs all at once can be annoying and uncomfortable for everyone.

When using GIFs, it’s always great to consider accessibility. Try to avoid GIFs that flash or blink, which can be dangerous to people with photosensitive epilepsy. If possible, add alt text descriptions, which help people who use screen readers and ensure that they, too, can appreciate the dancing baby that you posted.

The GIF That Keeps On Giving