What Does IMHO Mean? The Abbreviation Explained

Have you ever wanted to state your opinion as gracefully as possible via text? The abbreviation IMHO, which stands for "In My Honest Opinion" or "In My Humble Opinion," is the perfect way to do that. Discover examples of IMHO and whether the "H" really stands for humble, honest or both. 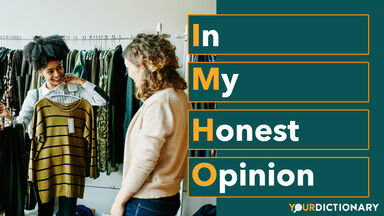 IMHO as an Abbreviation

IMHO is a popular online abbreviation that is perfect for softening a statement when you want to give your opinion. Whether the "H" stands for honest or humble is a matter of preference and (sometimes heated) debate. Numerous articles have been dedicated to solving the mystery, but a consensus has never been reached.

While the phrase “in my humble opinion” has been used for countless years, the exact origin of IMHO is not known, though it can be traced back to at least 1984. In 1986, the term appeared in a glossary of email acronyms in an edition of PC Magazine. There, it was defined as “in my humble opinion” A 1989 list of abbreviations also used "humble" but added that the use of IMHO was never actually humble. Although “humble” has been the commonly agreed-upon meaning for several years, “honest” has become more popular in recent years.

Other Versions of IMHO

Generally, IMHO only means "in my honest/humble opinion." However, given the debate about what the abbreviation stands for, it can be used in a couple of different ways. Additionally, letters can be added or subtracted from the abbreviation to change its tone and meaning.

Some examples of similar abbreviations include.

Examples and Usage of IMHO

Using IMHO makes it clear that what you are saying is an opinion and not a verified fact. It can be used to qualify the statement you have made or are about to make, or simply convey that you are being honest about what you think. However, it can also be passive-aggressive and convey a similar meaning to “I’m just saying.” You can place IMHO at the beginning, end or in the middle of a sentence.

Some ways you can use IMHO in context include:

If you want to state your opinion in a text or online conversation, look no further than these related abbreviations.