What Does ISTG Mean? The Abbreviation Explained

You can't exactly cross your heart and hope to die over text message — but you can STG! The texting term ISTG, which means "I Swear To God," tells people that you really do mean what you're saying. It can also be an expression of surprise or annoyance, similar to OMG! 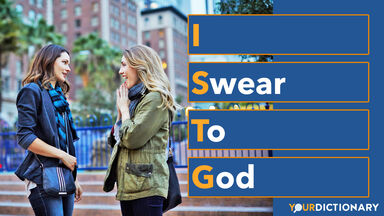 ISTG as an Abbreviation

ISTG is an initialism used online or in texting conversations. It often appears on social media as #istg, which you can use to tag posts that are making a genuine or exasperated point. You can use the uppercase ISTG version or the lowercase istg for the same effect. Even though it uses the word "God," it doesn't have a religious meaning.

The phrase "I swear to God" has been around for centuries, possibly since the 13th century. It comes from the courtroom oath that traditionally stated "I swear by Almighty God that the evidence I shall give shall be the truth, the whole truth and nothing but the truth."

The much shorter expression "I swear to God" has become common in conversational English to mean “I promise this is true.” ISTG is the natural texting abbreviation of the phrase — in recent years, it's even surpassed the full version in usage!

Other Meanings of ISTG

At first, it may seem like ISTG stands for Instagram because they contain the same letters. Instagram is typically abbreviated as Insta or IG, but ISTG can have other meanings:

Examples and Usage of ISTG

There are several ways to use ISTG online and over text. When you're promising that something is true, you might say:

You can also use ISTG to express annoyance or exasperation:

ISTG can also replace OMG (Oh My God) as an interjection within a sentence:

Want to convince someone to believe you, but ISTG isn't your favorite abbreviation? Use these instead: