What Does MFW Mean? The Abbreviation Explained

A picture is worth a thousand words, especially when that picture is a hilarious meme or a great reaction photo! When a picture perfectly captures your response to a situation, you use MFW, which means "My Face When." It works as the caption to the image that makes a joke about the person writing it. 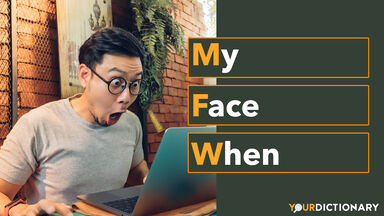 MFW as an Abbreviation

MFW (or lowercase mfw) is an initialism, meaning each letter is pronounced separately, used on social media posts and message boards. People respond to a picture showing a funny or exaggerated reaction with MFW, followed by a specific situation. For example, a picture of someone screaming might have the comment “MFW we’re out of syrup on pancake day.”

You may also see MFW as the text in a meme itself, or as a hashtag to use on a funny image on social media (#mfw). When you see it, the poster is using the image to make a joke about themself.

The term MFW began on 4chan imageboards around 2009. Posters used MFW as the first line of a reply to an image or in short greentext stories. It was most popular in 2012, but MFW has since been passed in usage by its full meaning, "my face when."

Other Meanings of MFW

At first glance, MFW appears to stand for “Monday, Wednesday, Friday.” But that’s MWF, which you’re more likely to use when talking about scheduling or calendars. Besides "my face when," MFW can also mean:

Examples and Usage of MFW

MFW can bring small chuckles or big laughs to readers, depending on how it's used. The best uses of MFW are as everyday captions to dramatic reaction shots. While MFW is most common on social media and message boards, it can also be used in text message conversations when one person sends an image as a reply.

A few online abbreviations can work in place of MFW, such as TFW (That Feeling When), which has become more popular than MFW in recent years. Another common abbreviation is MRW (My Reaction When), which is a useful substitute for MFW when the image includes body language rather than a facial reaction.