What Does OTP Mean? The Abbreviation Explained

If you are involved in any kind of fandom on the internet or follow anyone who is, you may have encountered the term OTP. This abbreviation is a favorite of many in fan spaces because it means “One True Pair/Pairing,” often referring to a fictional couple that the fan loves. Discover the history of this abbreviation and how it’s used in online spaces. 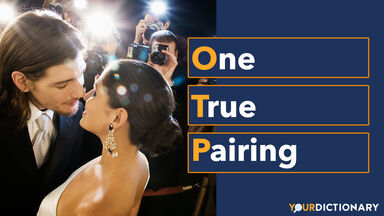 OTP as an Abbreviation

OTP (or otp) is an initialism where each letter stands for a word and is pronounced individually. It is usually used in writing but can be used in spoken conversation. Fans of a specific movie, TV show, book, or franchise will often use OTP in online discussions known as “shipping” where fans state which characters they think work well together or who they want to get together romantically. These pairings are often characters that are not explicitly paired together, but rather characters that the fans like together regardless of what is canon. While it is typically used for fictional characters, it is sometimes used to describe real-life couples.

The earliest known usage of OTP can be traced to LiveJournal in October 2002 in reference to the pairing of Joey/Lance from the boy band NSYNC, although it is possible the term originated earlier. The abbreviation OTP gained popularity in the 2010s in online spaces and peaked in 2015.

Other Meanings of OTP

Outside of fandom slang, OTP has several other meanings and uses. The most common include:

Examples and Usage of OTP

When using OTP to describe your “one true pairing,” the tone is often light and casual, as it is most frequently used in online fan spaces.

You can use OTP to mean “on the phone” in text messages like these examples:

There are many abbreviations similar to OTP that you can use in online conversations to talk about your favorite (or least favorite) couples.