What Does P.S. Stand For? Little Lines That Make a Difference

You’ve likely seen the abbreviation P.S. in an email or letter, but what does P.S. stand for at the end of a letter? Whether you are signing off and want to add additional information or you want to include a tidbit that did not fit in the main body of your letter, P.S. is a handy tool for any correspondence. Knowing how and when to use P.S in a message can help you make a good impression when communicating with people at work, school or in general. 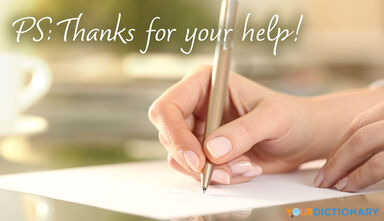 writing letter with PS: Thanks for your help
Advertisement

What Does P.S. Mean?

The abbreviation P.S. is short for “postscript” and is used to include additional information at the end of a letter, email or other document.

“Postscript” is derived from the Latin word postscriptum, which translates to “written after.” Post means after and scriptum means written. The term postscript first entered the English lexicon in the early 1500s and has remained popular over the centuries.

The concept of including a postscript at the end of a document dates back to an era when letter writing was the dominant method of communication. Because a person could not go back and edit the handwritten letter, they would simply include a postscript with the additional information they forgot to include in the body of the letter. This tradition has endured in the email age and is often used to add or highlight important information at the end of digital communication.

P.S. is a commonly used abbreviation that indicates an afterthought or additional information that was not included in the main body of the letter or email correspondence. A postscript can also draw the reader’s attention and emphasize important content that would otherwise get lost in the text. Because of this, it is often used in email marketing to indicate a clear call to action and highlight the message of the document.

How to Write P.S.

While P.S. is typically written with both the “P” and “S” capitalized with periods between each letter, it can be written a couple of different ways.

How to Punctuate P.S.

Sometimes the postscript is followed by further punctuation. This can vary widely. Most styles use a colon (:) after P.S., while others use a dash (-). Still, others may not use any punctuation at all other than the periods between letters. However you write your postscript, consistency is key!

Where to Place P.S.

The postscript should always follow the signature at the end of a letter. It should never be placed before the closing. The purpose of P.S. is to include important information that was not in the body of the text. In the example below, the postscript emphasizes when the forms are due and the urgency of the task.

I hope this email finds you well. Please see the forms attached below.

P.S. Don’t forget to send me the completed forms by the end of the day.

Reading examples of how you can write P.S. at the end of an email, letter or text will help you better understand how to use this little abbreviation.

What Does P.P.S. Stand For?

If you want to add even more information at the end of a message, you can use P.P.S., which stands for post-post-scriptum. This allows you to highlight any other afterthoughts you may have and separate them from the first P.S. A P.P.S. section should come after the initial P.S., and both must be placed after the signature.

Now that you know all about writing a postscript, challenge yourself to use P.S. next time you write a professional or personal letter or email. For more letter writing tips, brush up on how to write a letter. Then, explore formal communication by learning how to write business letters.