What Does ROFL Mean? The Abbreviation Explained

Has your friend ever sent you a text that was so funny you couldn’t stop laughing? Conveying humor over text is difficult, but ROFL, which stands for "Rolling On the Floor Laughing," will make it clear you think something is hilarious. Explore different ways you can use ROFL in text and direct messages. 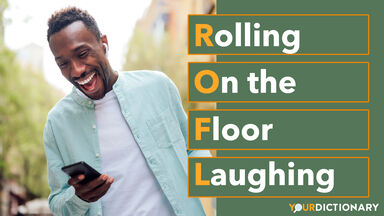 ROFL as an Abbreviation

ROFL is an initialism, so every letter is pronounced individually when you say the abbreviation out loud. It can be written with upper or lowercase letters depending on your preference. The term is typically used only in writing, whether online or in text, rather than speech.

The term “rolling on the floor laughing” likely comes from similar expressions like “rolling in the aisles” which describes someone laughing uncontrollably. It became popular in the early days of IRL (internet relay chat) as an alternative to LOL (laughing out loud) and continued to gain steam over the years, peaking in the late 2000s.

Other Meanings of ROFL

ROFL can be written as ROTFL with the "T" standing for “the.” However, this is less common. It can also be merged with other acronyms. For instance, ROFLMAO (rolling on the floor laughing my a** off) is very popular online and in text messaging. Other meanings of ROFL include:

Examples and Usage of ROFL

ROFL is a great alternative to LOL and can be used to express extreme amusement, either at something someone said or did or at your own expense. It can come at the beginning or end of a sentence. It is also informal and best used among friends and family.

There are several ways to express amusement through text. These abbreviations can often be used interchangeably with ROFL.