What Does TERF Stand For?

You may have seen the term “TERF” come up over the past few years. It has most famously been associated with J. K. Rowling, author of the beloved Harry Potter series, but she's hardly the only person given this label. Trans-exclusionary radical feminism (TERF) is on the rise, but the ideologies behind the movement aren’t as radical or feminist as they suggest. 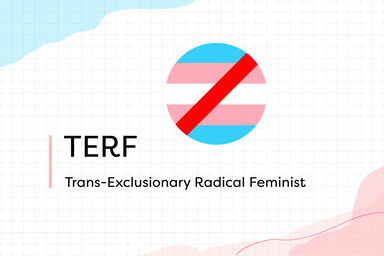 A transgender (abbreviated to “trans”) person identifies as a gender that does not correspond with the anatomical sex they were assigned at birth. For example, a trans woman may have been assigned male at birth (AMAB) but now identifies as a woman.

A cisgender (abbreviated to “cis”) person identifies as the same gender they were assigned at birth. For example, a cis woman was assigned female at birth (AFAB) and identifies as a woman.

What Is a TERF?

TERF is an acronym that stands for “trans-exclusionary radical feminist.” It can be pronounced like the word “turf.” Broadly, TERFs comprise a group of people (usually cisgender women) who hold strong anti-trans views.

Radical feminism (also known as radfem) began in the 1960s and was built on ideologies that pushed inclusion and a dismantling of the patriarchy. By the 1970s, a minority group of radical feminists began pulling away from the main ideologies, specifically excluding trans women.

Although the idea of trans-exclusionary feminists had existed since the 1970s, the term TERF wasn’t coined until the late 2000s in a series of blog posts.

While actual theories can vary among individuals, the main ideology of TERFs is that trans women are not women.

TERFs also believe that “gender identity” is not only false and unscientific but also harmful. Ironically, most of their own ideas are unscientific or, at best, anecdotal.

Is TERF a Slur?

According to some, the term “TERF” itself is a slur or misogynistic.

This line of thinking is a means of deflecting. It ignores the actual problems involved with anti-trans bigotry in favor of centering oneself and claiming victimhood.

The damage inflicted by an acronym is miniscule compared to the actual, real life policies that contribute physical, mental, and financial harm to transgender people and communities.

Not on My Turf