What Does TFW Mean? Understanding the Modern Abbreviation

Human communication is all about sharing experiences. Whether it’s a 1200-page novel or a social media post about your morning iced coffee, all we want to do is connect over the common details of our day. Wouldn’t it be nice if there was a quicker and more effective way to do it — say, a way that only consisted of three magic letters? 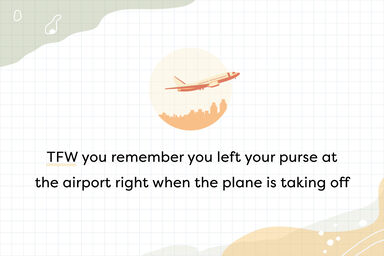 TFW: That Feeling When

TFW stands for “That Feeling When,” and it’s a way to get right to the point of a relatable (usually embarrassing or painful) moment. It’s often used in texting, social media comments and captions, and message board replies.

TFW is more popular than the similar MFW ("My Face When"), which usually accompanies a picture of someone making an exaggerated face. But unlike MFW, TFW can stand alone with its own micro-story, just waiting for someone to relate to it.

Use TFW to summarize these cumbersome phrases that we’ve certainly outgrown:

When To Use TFW

Even in the 21st century, there are many universal experiences that cross cultures, generations and social classes. Stubbing your toe feels the same in every language, for example; so does getting ghosted by a first date or being embarrassed in front of a group of people.

Other examples of TFW moments may include:

It Can Also Mean

While “That Feeling When” is the most common usage of TFW, it may also stand for:

It all depends on where you’re posting your TFW. On social media platforms, it’s safe to assume that it’s describing a shared feeling, but “feeling” may become a very different “f” word when posting to more off-color sites and boards. Either way, it’s a very frank way to explain exactly what you mean in the moment.

For more guides on modern communication, check out: