What Does TIL Mean? The Abbreviation Explained

Whether you’re browsing your social media timeline or you’re a regular Reddit user, you will encounter the abbreviation TIL at some point. TIL stands for “Today I Learned” and usually comes before a fun fact. Explore the origins and use of this abbreviation. 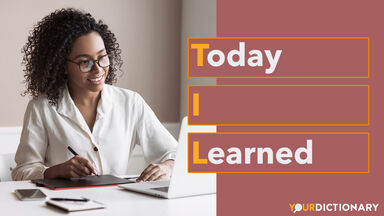 TIL as an Abbreviation

TIL or til is an abbreviation that is usually written but isn't spoken out loud often. It is written without periods and is typically used informally in online conversations or social media posts.

The abbreviation TIL can be traced back to Reddit. This was originally created so that Reddit members could learn interesting or little-known facts about a topic. On December 28, 2008, a Reddit user named nix0n created a subreddit called Today I Learned. According to Google Trends, TIL has been used online since at least 2004, and its use steadily increased throughout the 2010s.

Other Meanings of TIL

Though “today I learned” is by far the most common use of the abbreviation TIL, there are some others that can be found online or in text. Typically the context of the conversation or topic will clue you in on which meaning the person writing intends.

Till, 'Til and Until

Additionally, till is a synonym of until, not an abbreviation for it. Unlike popular text and internet abbreviations, till has been used in the English language for centuries and is even older than until. On the other hand, ‘til is an abbreviated version of until that is used from time to time, but till is generally regarded as more correct.

Examples and Usage of TIL

TIL can be fun or informative depending on your audience or the topic at hand. Here are some examples along with fascinating trivia that you can use to impress your family and friends.

If you want to convey more information to your friends or readers online, via text or in any other informal text-based communication, you can use these abbreviations.