What Does TTYL Mean? The Abbreviation Explained

TTYL stands for “Talk To You Later.” It has become popular internet slang as well as a go-to way of saying goodbye to someone via text. Explore different ways to use TTYL with your friends and family. 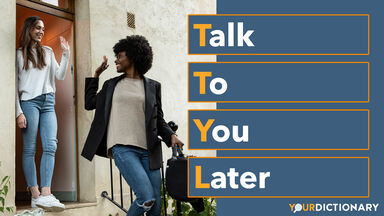 TTYL as an Abbreviation

TTYL is an initialism, which means every letter is sounded out individually when spoken, although it is more common in writing than in speech. It is popular all over the world and used among various age groups and demographics. The abbreviation is so popular, it's actually the title of a New York Times bestselling book, TTYL. TTYL is commonly used in both public and private conversations on Twitter, Facebook, Instagram, and more as well as in SMS text.

While the phrase “talk to you later” has been around for countless years, its abbreviation TTYL gained widespread usage in the 1980s or 1990s, although the exact origin is unknown. Some believe it originated from the British English expression “ta ta, you all.”

Other Versions of TTYL

Unlike other initialisms that have multiple meanings, TTYL only stands for "talk to you later." It can be written in either all upper case or all lower case letters, and some versions even include numbers.

How you write "talk to you later" is a stylistic choice. All four ways will be read the same and can be used in the same contexts.

Examples and Usage of TTYL

The abbreviation TTYL is used as a way to end a conversation, let someone know you can’t talk now or another way to say goodbye. You can say it after an online or text conversation or text it to someone after seeing them in person.

There are several ways you can close a conversation or say goodbye with just a few letters.