What's an SJW and Where Does the Term Come From?

When someone calls you a “social justice warrior,” it sounds like it should be a compliment. After all, you’re battling against the forces of institutional discrimination — what could be wrong with that? According to the internet, which has become the arbiter of all things, plenty. Being called an SJW is not a point of pride, and if the insult comes your way, prepare for a good defense or some serious self-reflection. 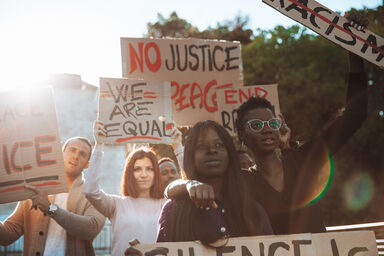 SJW stands for “Social Justice Warrior” and is a sardonic term for someone who advocates for socially liberal or progressive politics. Typically, it’s an ad hominem attack from someone who would rather call names than back up their own argument. Depending on the level of invective in the discourse, SJW can go from a tongue-in-cheek comment (“Don’t want to upset the SJWs out there, but I’m a conservative”) to an out-and-out insult (“I can say the N-word any time I want, so take that, SJW.”)

Where Did It Come From?

Calling someone a “social justice warrior” wasn’t always a put-down. It used to be high praise for those who spent their lives fighting for persecuted populations. But the meaning changed around 2011 during the Obama administration in the U.S., when political tempers were high and traditional politics were transformed into online diatribes. The term was shortened to SJW soon after and became even more popular than its original form.

You’ll find the initialism SJW pop up when these issues are up for discussion:

Depending on where you’re posting your opinion, any mention of these topics may garner an SJW in the comment section. Once someone calls you an SJW, it’s probably worth ignoring — but take a moment to reflect on what you’ve said first.

It’s Not Always Without Merit

The majority of the time, SJW is just a lame insult. However, if you’re seeing it over and over again, it may mean that you’re being performative with your politics, particularly if you’re posting over-the-top arguments to appear as though you are a super-charged advocate for disadvantaged groups. It’s also true if you’re doing so to shame others — especially those who agree with you — and to make yourself look like a heroic advocate.

However, if you’re standing up for important social issues and genuinely aren’t trying to collect admiration from others online, you can take those SJW comments with a grain of salt. After all, name-calling is not exactly a high form of rhetoric.

In the years since the Obama administration, many more members of the population (on both sides of the spectrum) became politically active and vocal. As a result, SJW has become less of a pejorative and more of a badge of honor. So the next time someone tosses an SJW in your direction, don’t take it as the insult they mean it to be.

Have you spotted more unfamiliar acronyms and terms in your online discussions? Learn more about them with: